Insights from 'The Almanack of Naval Ravikant' by Eric Jorgenson

A guide to wealth and happiness (with diagrams)

The world is awash in business books. Some of these tackle one core idea, fattened with hundreds of anecdotes and supporting examples. Others synthesize a diverse range of concepts in fresh ways, helping you reframe them entirely. The Almanack is an example of the latter. We consider it a must-read for business owners, entrepreneurs and creative thinkers.

Who is Naval Ravikant?

Ravikant is an entrepreneur, advisor and investor, who gained fame in the tech world as a result of his early-stage investments in success stories like Twitter and Uber. The Almanack is collection of his wisdom transcribed from his podcasts, essays and interviews, and compiled by Eric Jorgenson.

3.     Learning the skill of happiness

As a child of Indian immigrants, Naval grew up in the United States with modest means. After starting various ventures in his 20s and 30s he gradually amassed a fortune, largely in his role as founder, investor and advisor to 200+ companies.

Naval recommends optimizing for wealth, rather than money or status. His definitions are summarised below:

Finding a position of leverage

If you work in the field of expertise, you are not going to amass wealth by renting out your time. Instead, wealth comes from the strategic application of leverage.

What is leverage? Leverage is essentially a force multiplier:

According to Ravikant, business leverage comes from three possible sources:

3.     Products with no marginal cost of replication (in other words, technology such as
code or media) 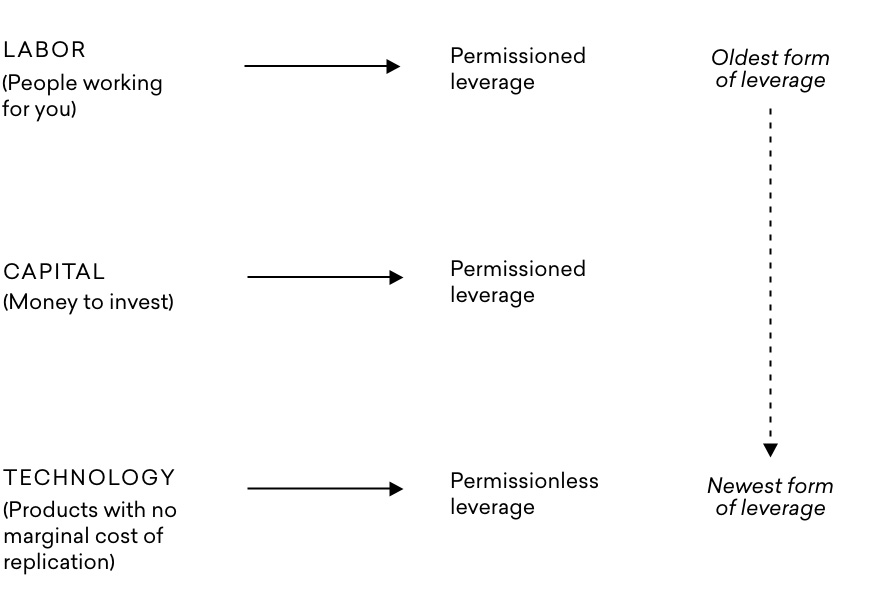 Code is probably the most powerful form of permissionless leverage. All you need is a computer – you don’t need anyone’s permission.” – Naval Ravikant

The third category of leverage (products with no marginal cost of replication) started with the printing press in the 15th century. It accelerated with broadcast media in the 20th century and has now reached new heights with the advent of the internet. In today's age, you can multiply your efforts without labour or capital – for example, by creating software and media that generate income while you sleep.

Without leverage, your inputs are closely tied to your outputs (8 hours of work equals 8 hours of earnings). Your earning potential is linear:

Leverage such as technology creates a disconnect between inputs and outputs. Returns are potentially exponential:

Optimizing for the long term

Leverage, combined with the magic of compound interest, leads to long-term returns.

All the returns in life, whether in wealth, relationships or knowledge, come from compound interest." – Naval Ravikant

Investing in something for decades – whether it’s the honing of a skill, the nurturing of a relationship, or the building of a business – pays long-term dividends via the effects of compounding.

The key to success is becoming a "perpetual learning machine". Today, it is much more important to be an efficient learner and to have the ability to become an expert in a brand-new field than to have studied the “right” thing years ago.

Ravikant personally reads for one to two hours a day, focusing on the fields of microeconomics, game theory, psychology, persuasion, philosophy, ethics, mathematics and computers.

The second section of the book focuses on honing your mental capacities and decision-making abilities, so that you can apply leverage in the right direction.

The direction you’re heading in matters more than how fast you move, especially with leverage.” – Naval Ravikant

Related definitions are captured below:

To hone your mental faculties, it is important to make space for thinking.

Our best ideas don’t come to us when we are stressed, distracted or in a rush.  They arrive when our minds are relaxed and porous.

Tim Ferris covers similar ground in Tools of Titans by reinforcing the importance of scheduling large, uninterrupted blocks of time (which he calls “de-loading phases”), during which your mind can wander, ponder and find the “signal amidst the noise”.

If you work in the field of expertise, your work schedule should resemble successive sprints rather than long marathons. This means training and exerting like an athlete, then resting and reassessing:

The forty-hour work week is a relic of the Industrial Age and leads to less-than-optimal performance for working professionals.

3. Learning the skill of happiness

Naval believes that happiness is a highly personal skill that can be learned, like fitness or nutrition. 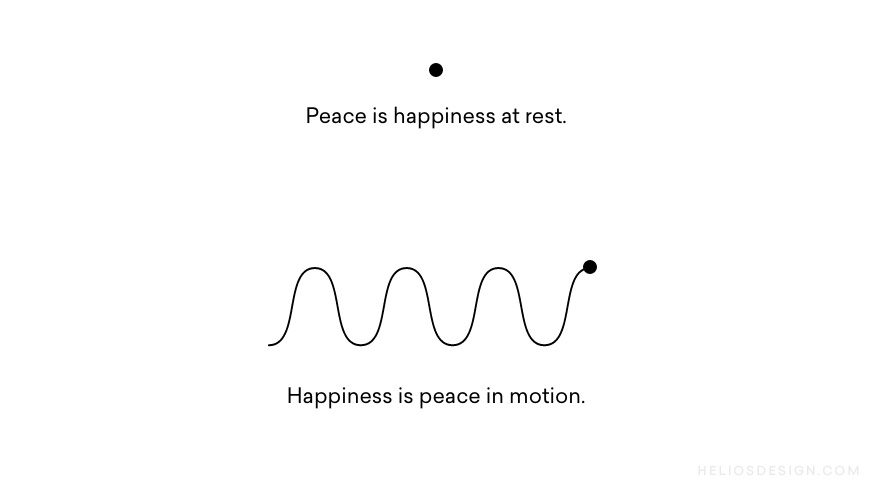 A happy person is not someone who is happy all the time. It is someone who "effortlessly interprets events in such a way that they don't lose their innate peace".

Being peaceful comes from having a mind clear of thoughts. Mental clarity, in turn, comes from being present: 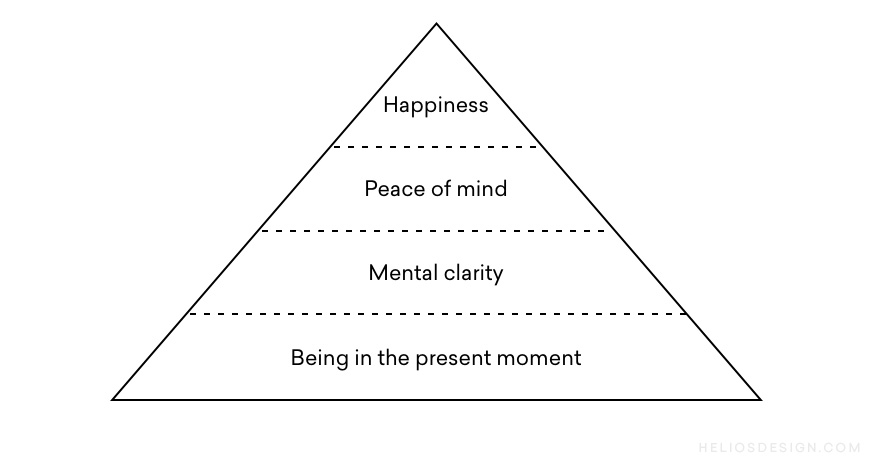 Naval Ravikant recommends meditation as the equivalent of “intermittent fasting for the mind”. Time spent undistracted and alone – such as solo walking, journaling or self-examination – are all forms of meditation. These processes run your brain in “debug” mode and help clear your mental inbox of “unanswered emails”.

The three big ones in life are wealth, health, and happiness. We pursue them in that order, but their importance is reverse.” – Naval Ravikant

Wealth, health and happiness are interconnected. We typically prioritize some of these areas at the expense of others, and this tendency shifts as we age:

The trifecta is to aim for all three at once: 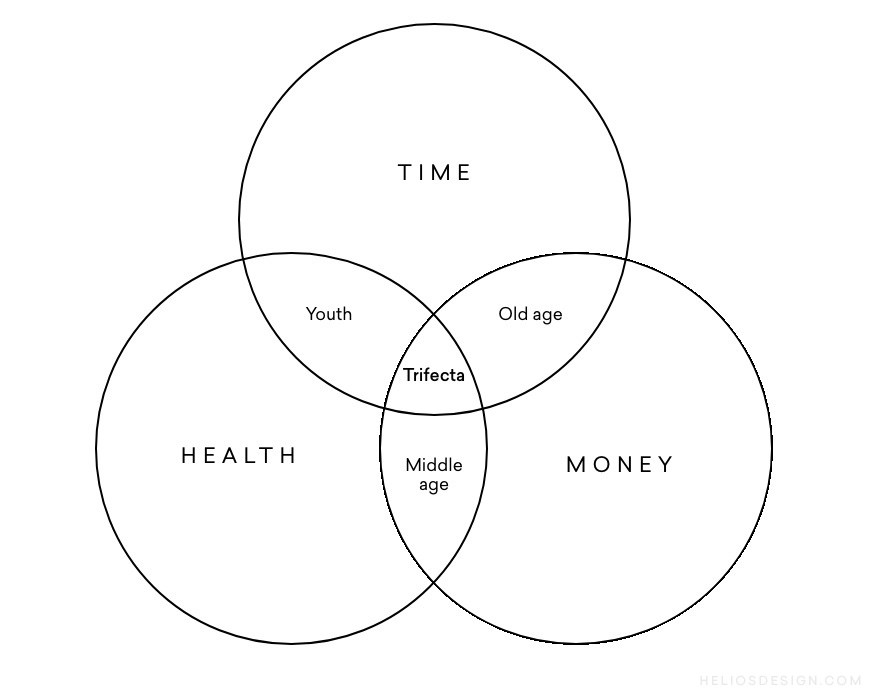 Your life is a firefly blink in a night. You’re here for such a brief period of time. If you fully acknowledge the futility of what you’re doing, then I think it can bring great happiness and peace because you realize this is a game.” – Naval Ravikant

Do check out the full 'Navalmanack' in printed, PDF or audio formats and let us know your thoughts in the comments!

What to read after The Almanack of Naval Ravikant:

We have a team of rockstar developers who can help you productize your expertise through the application of technology as leverage.

Insights on expertise from 'The Business of Expertise' by David C. Baker

How to write a website brief (with sample brief)

Insights from 'The Advice Trap' by Michael Bungay Stanier